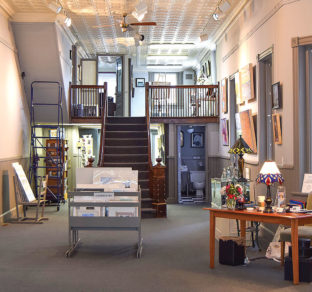 Stop by the Uptown Gallery on West Main Street this month (April 22 to 25) to meet its artists and browse their artworks. The gallery, a cooperative artist community, has been open for 32 years. Photo by David Robatin
PRINT 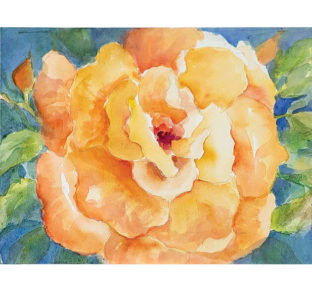 “Rising With the Sun” by Faye Henderson 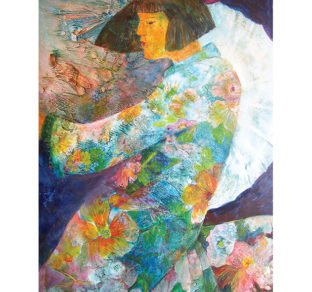 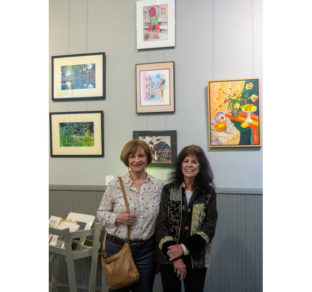 A recent photo of Solange Brown and Faye Henderson 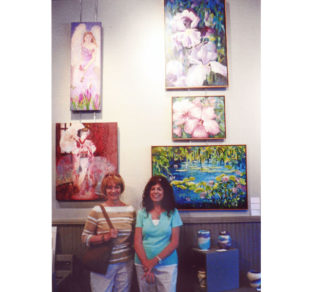 An old photo of Solange Brown and Faye Henderson
By Catherine Brown Posted on April 13, 2021

A few weeks ago, Uptown Gallery artist David Robatin was leafing through a folder of old articles and scrapbooks he found in the storage area when he came across a photo of two longtime members, Solange Brown and Faye Henderson.

The two artists, now in their 70s, happened to be there that evening, so they reminisced about the changes they had seen over the 32 years since the Gallery first opened. Robatin even had them pose to recreate that original photo.

Brown and Henderson are the only two founding members who still belong to the Uptown Gallery — an artists’ cooperative housed in one of the pastel-colored buildings that lines West Main Street (sometimes referred to as the Pastel Village).

Uptown Gallery came about in part because of Edgar Eck, who, in the late 1980s, was working to develop Uptown Richmond — the area of West Cary and West Main Street where VCU meets the Fan District.

In response, more than 30 artists came together to open Uptown Gallery — a place for artists to exhibit and sell their work, exchange ideas and learn from one another.

In a way, the gallery was like a small art school. “Most of the founding members were seasoned artists,” said Brown, who at the time was shifting from creating graphic work and pen-and-ink drawings to watercolors. “I got a lot of help [from them] developing my art.”

Eck offered the building rent-free to the co-op for many years. After his death in 2012, Eck Enterprises has rented the space to them for “a very reasonable price,” Brown said.

A safe space for art

Robatin joined Uptown Gallery three years ago deciding to take his art more seriously. Members are juried in by the Gallery Board, who review the potential member’s recent work.

For Robatin, membership is well worth the monthly dues and requirements to exhibit and work at the gallery. Belonging to the co-op provides him the opportunity to hear constructive, well-meaning feedback from fellow artists.

“The artists nurture one another,” he said. “You feel like you’re in a safe space.”

Many of the members of Uptown Gallery have been working as professional artists for decades. “I would put them against any artists in Richmond,” Robatin said.

A number of participating artists are also members of other well-respected arts organizations. Brown, for instance, is a signature member of the Virginia Watercolor Society.

When Robatin joined the group, he was moved by the ways the artists interacted with one another. “They’re all friends and are very supportive of one another,” he said. “It feels like I am at home.”

Brown agreed. “Everyone’s really close,” she said. “We are like a family.”

Changes over the years

From the beginning, every member of the co-op has contributed to the gallery’s success.

Artist members take turns sitting at the desk greeting visitors and helping them pick out work they might like to purchase. “Every time a visitor comes in, they talk to an artist,” Brown said.

While the Gallery is open regular hours during the week, they also, pre-pandemic, typically stayed open for First Fridays, when galleries on and surrounding Broad Street would keep their doors open late. “We try to attract visitors our way, off the beaten path,” said Brown.

Artists also work on various tasks that keep the gallery going, such as hanging works for shows — one of Brown’s jobs over the years — marketing, publicity and maintaining the website. “Everybody does what they can to help share the load,” Brown said.

In recent years, Uptown Gallery has diminished from more than 30 members to fewer than 15. Some have moved on to other things; many have passed away. That means members work more than they did in the past.

Uptown Gallery now rents part of its three gallery spaces to outside artists. The Main Gallery is still typically reserved for member artists, but outside artists can rent studio or exhibit space in the Frable Mezzanine Gallery and the ELM Loft Gallery (named for founding member Emma Lou Martin, who remained a member until late last year). Uptown Gallery also hosts workshops to help pay expenses.

Reemerging from the pandemic

Brown says she hopes Uptown Gallery can survive the challenges of the past year. The restrictions in place to help slow the spread of COVID-19 kept the gallery closed for a while. Now it is open again, but with limited hours.

To celebrate the lifting of some restrictions and the arrival of spring, the artists of the Uptown Gallery are planning a four-day neighborhood celebration in April. They want to remind the community that they are still passionate about creating unique art and being part of Uptown Richmond.

“For all that people have been through,” Robatin said, “it feels like an opportunity to open our arms, welcome visitors, and let them know we’re still as vibrant and active and passionate about the arts as we always have been.”

Robatin emphasized there’s no pressure for visitors to buy anything during the celebration. The artists developed the event in part to provide a space for the community to gather.

The event is also a good reminder that, despite weathering losses and change, the artists’ co-op continues to add value to its members and the community, thanks in part to the founding members who have nurtured fellow artists for three decades.

“Solange Brown and Faye Henderson were there at the beginning of this little gem of a gallery from day one,” Robatin said, “and they continue to be vibrant voices in the gallery today.”