What retirees (should) want 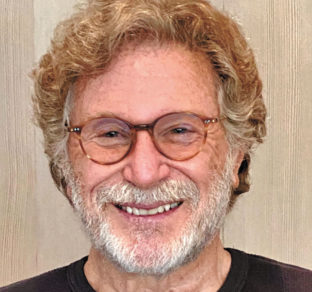 Ken Dychtwald has studied the psychology of aging for more than four decades. In his 17th book, published this year, he and co-author Robert Morison reveal their research on retirement, or “life’s third age.” Dychtwald will be the keynote speaker at this year’s Virtual 50+Expo, which runs Nov. 1 to Jan. 31, 2021. Photo courtesy of Age Wave
PRINT 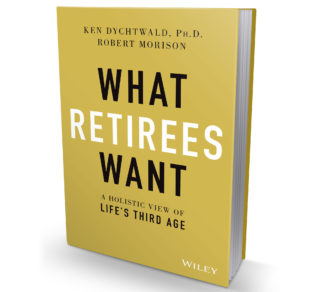 Since he was 24 years old, author and aging expert Dr. Ken Dychtwald has studied the psychology of retirement. Now 70, he has given presentations on his research into the subject of aging to more than one million people over the years.

Yet the renowned gerontologist is in no hurry to retire himself from the company he started 40 years ago.

“The irony of the fact that I’m not terribly interested in retirement [personally] is not lost on me,” Dychtwald, CEO and Founder of Age Wave, said in an interview with the Beacon.

“Over the decades I’ve been studying retirees, and what I’ve found is about half the retired population are bored out of their wits….If you retire at 65, you might have 20 or 30 years in front of you. That’s a long time.”

This spring, Dychtwald published his 17th book, What Retirees Want: A Holistic View of Life’s Third Age, with researcher Robert Morison. The book, which includes not only charts and graphs but personal stories, is the culmination of years of research on the topic of aging and is intended to be a retirement guidebook of sorts.

Dychtwald will be speaking about the book and its major takeaways as the keynote speaker of the Beacon’s first Virtual 50+Expo this fall.

A road map to retirement

Dychtwald points out that when people retire — unlike when they enroll in college or start a new job — “There’s no orientation. There’s no workshop. In fact, that’s one of the reasons we wanted to write this book,” Dychtwald said. “Because there has never really been a roadmap.”

To begin to sketch a map, Edward Jones Company and Age Wave released a new study in August on the “four pillars of the new retirement” — health, family, finances and purpose. Already, the study has received 1.5 billion media impressions.

All four pillars are key ingredients for living well in retirement, which may seem obvious. But there are issues acquiring each of them, researchers found.

For example, even though it’s “never too late” to improve your health, many retirees don’t follow through on their well-meaning intentions. The study also found that the biggest health fear of retirees is not cancer or even COVID, but rather dementia, over which we may have less control.

Family relationships can play a major role in well-being, but forging positive social connections doesn’t require blood relatives. And as much as we want to be able to rely on family should it come to that, at the same time most of us don’t want to be a burden on them.

The newfound “time affluence” that comes with retirement leaves many floundering to find a meaningful way to spend it. Despite what TV tries to teach us, older adults want to feel useful more than youthful.

The study, which Dychtwald considers a “capstone project,” was based on 9,000 interviews and nine months of research on retirement done last year.

But once the pandemic hit, they returned to the interviewees to update their findings. What they found was that “Older people are more resilient…This is horrific, what’s going on [with COVID-19], but there’s some perspective” among older adults from their decades of life experience.

“What our study revealed is that we want to think of older people as more vulnerable, more fragile…but older people were more fortified, more resilient than we ever imagined” and coping better with the pandemic than many younger generations.

Besides the benefit of life perspective, another reason for this resilience may be due to the study’s finding that, on average, people over age 65 have more of an economic safety net than do younger adults. They receive monthly checks from Social Security (average $18,000/year), the value of Medicare coverage is estimated at $12,000 a year, and many have paid off their houses.

Though younger people are less likely to suffer serious ill health or death from the coronavirus than older adults, many are experiencing more serious financial effects through job loss and interruptions to their education.

Early studies with the masters

Dychtwald graduated from Lehigh University in Pennsylvania, then earned his PhD in psychology at Union College.

He then headed the Sage Project at the University of California at Berkeley, which studied how the aging process could be improved by alternative therapies such as yoga and meditation.

There he studied with Elizabeth Kübler-Ross, who is famous for developing her theory of five stages of grief. That influence inspired Dychtwald’s “Five Stages of Retirement” theory, which emphasizes that retirement is a journey, not a destination. Other professors and mentors of his included the famed psychologists Joseph Campbell and Erik Erikson.

Thanks to these iconic mentors, Dychtwald said, “I have grown up believing that in the later years of life…there’s a purpose; there’s a challenge.” Erikson, for instance, had a “theory of generativity,” the seventh of eight stages of psychological development.

“By that he means giving back — it’s not necessarily a nifty thing to do, but it’s what you’re supposed to do. It’s what a grownup does,” Dychtwald said.

“[Erikson] said that’s what you’re supposed to do when you’re an elder — make sense of the life that you’ve lived. You stitch the pieces of yourself together, you become a full, whole person, and part of that is so you can leave a legacy.”

This legacy can take several forms, Dychtwald believes. Older adults — men, in particular — should consider volunteering in their communities. At the moment, only 24% of America’s 68 million retirees do volunteer work, and those do so only an average of 2.5 hours a week.

Dychtwald said that’s not enough. “The average retiree watches over 2,800 minutes of television a week and spends less than 30 minutes contributing to their community,” Dychtwald said. “Shame on us.”

Sure, many people have family obligations, he said, and he respects that commitment. “If you babysit the grandkids or you’re subsidizing your adult children, that’s wonderful. But are you volunteering for somebody else’s community; are you helping people in need?

“A lot of our retired population don’t know what their purpose is,” he said. “The world is waiting for more of an activation of our elders, and I think we’d all be better off if we had old and young doing more things together.”

Dychtwald also hopes retirees will muster the courage to try new activities — volunteer as a tutor, learn a new language, take up guitar, study the stars. Retirement is freedom from obligations like child rearing and work, he said, but it’s also freedom to pursue your heart’s desire.

At the same time, Dychtwald encourages older adults to stay current. “A lot of people push themselves to the sidelines when they get older. They don’t keep track of modern ideas; they don’t stay current with technology; they don’t pay attention to new culture, new music, new fashion.”

Next act: memoir this spring

Dychtwald’s 18th book, a memoir titled Radical Curiosity, will be published in March. He wrote it to honor Erikson’s generativity stage of life, to pass on his knowledge and leave a legacy to his two children, now in their 30s.

“I turned 70 this year, and I decided I was going to collect my stories so that they can be passed from generation to generation,” he said. His friends told him, “You have to publish this; you’ve had one bizarre life!’”

One of his life’s more placid moments was when Dychtwald, 27, recorded a video of his grandmother Clara, one he likes to share with his audiences today. Clara, an orphan, recounts her memories of growing up without shoes or indoor plumbing.

“What do you want us to learn from you?” he asks his grandmother, who in the video is wearing a modest housedress. She replies, “To be good, honest, respectable, and live happy with your family, like I lived happy with my husband.”

Moments later, she tells her grandson, “From the minute you were born, I loved you. Find a nice girl and get married, and I’ll love you double.”

Clara may have been reassured to know that her grandson has been happily married since 1983.

Ken Dychtwald is the keynote speaker at this year’s Beacon Expo, an all-virtual event accessible from Nov. 1, 2020 until Jan. 31, 2021. To watch his keynote address, followed by a brief interview by Beacon publisher Stuart Rosenthal, visit the Expo website — beacon50expo.com — any time after Nov. 1.

His new book, What Retirees Want, is available in print, digitally and as an audio book. All proceeds from the book are being donated to the American Society on Aging.