When someone nears a precipice, help 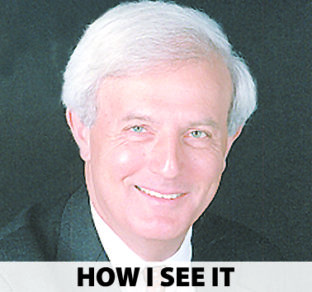 When his wife was alive, he was a rock. Government executive. Nonprofit board member. Husband/father/grandfather. Always willing to donate an hour or a dollar to someone in need.

But then cancer took her. They had been married for more than 40 years.

For a few weeks, he remained a rock: No, thanks, don’t need anything. Yes, going to stay right here in the house. No, won’t change a thing right away, and probably not ever.

That vow lasted for about a month. Ever since, he has adopted a new philosophy.

The man no longer watches his weight. He no longer limits himself to one glass of wine at dinner. He has stopped all charitable contributions. And he is aggressively dating every woman he can find.

Despite the pandemic, and the fact that his age begins with a 7, he travels whenever he likes. He just traded in his 10-year-old Toyota Prius for a shiny black SUV that’s as big as some houses. He tells friends that he is shopping for condos in the Caribbean — the splashier, the better.

As he puts it, his credit card is “tanned, rested and ready.”

Worried about him? That’s an understatement. His friends have tried to intervene. His children plead with him to straighten up.

A psychologist friend tells me that What-The-Hecking is not all that unusual in this man’s circumstances.

When a spouse dies, especially after a long marriage, the survivor comes sharply face-to-face with his own mortality. “He may conclude that the clock is ticking for him, too,” the psychologist said. “So, he may try to wriggle away from his own death.”

Of course, by What-The-Hecking, the man may be hastening his own death, not delaying it. This man doesn’t care.

He has even brought music into the discussion. When you phone him these days, and the answering machine clicks on, what you get are the first few bars of the Delta blues song, “My Time After a While.”

“Right, I chose it because this is my time,” he told me. “I have never felt so good or so free.”

His family thinks the man is dishonoring the memory of his wife. He says that misses the point.

“I will never forget any birthdays or anniversaries,” he told me. “But like the song says, I’ve been living for others for years. Now I live for me.”

A major piece of the family tension revolves around money. His children and grandchildren had always expected to inherit his considerable estate. He had told them to expect that.

But now, he has rethought that idea. “I earned that money, so I get to spend it,” he told me. “I’ve decided that the last check I write will bounce.”

His older sister tried to reason with him. She warned him that the men in their family typically don’t live a long time.

His reply: “I’ve taken off the guardrails and thrown them in the river.”

His doctor pointed out that a body’s resilience depletes over time. If he’s healthy today, great. But that doesn’t promise good health tomorrow. In fact, the doctor told him, if a man in his 70s doesn’t exercise or sleep enough (he says he does neither), he is playing with fire.

“I don’t pay any attention to that,” the man told me. “I’m going to die anyway. Might as well go out with a smile on my face.”

In our most recent conversation, I warned the man about another danger: gold diggers.

“You’re a man with most of his hair and most of his money. Women will swarm you,” I said.

“Is that such a terrible thing?” he replied.

In fact, it can be a very terrible thing. A banker at my neighborhood branch says he has been trained to be on the lookout for men who have adopted What-The-Hecking.

“Just last week,” he said, “I had a client come in. Older fellow. Been with me for many years. His accounts never had much activity in them. He was a squirrel — saved his acorns.

“But now, he had a lady on his arm — literally on his arm. And he wanted to withdraw $50,000 in cash. I couldn’t say no. But I did ask him three times if this was really what he wanted to do.”

The banker has no idea what became of the money. But then…

“His daughter called me the next week and asked me to put a block on his accounts. She said some woman was trying to get the right to make withdrawals without his permission.

“But then the man gave his permission! So, again, nothing I could do.” In less than a month, his accounts had been lightened by more than $100,000.

For the rest of us, there’s plenty we can do.

If we have a friend like this — obviously rocked off balance by a death, obviously not using good judgment — we can make it a point to lobby persistently against What-The-Hecking.

In my case, I relayed the banker’s tale to my friend. He reacted with a big “Hmmmm.”

The next day, he later told me, he added both of his children to all of his accounts. He now cannot withdraw large sums unless they both countersign.

What-The-Hecking still beats strongly in this guy’s 70-something breast. But if small progress has happened — and it just did — perhaps bigger progress isn’t far behind.